so im leaving fujiyama after having a wonderful lunch with yoches and johnny (see marriage post below) and I stop because Tony from Chicago Bikes is talking to some bum looking guy. The guy kinda walks in front of my car so thinking he's with Tony I let him pass instead of knocking him down and throwing old smoothie at him. I let Tony pass as well. That's when I hear what they're talking about!

Tony is like "I said give it back! Hey you, get back here!"
Then the bum takes off running. Tony in turn gives chase. This happens so slow I just sit and watch laughing as the two run off down the street in slo-mo. I figure I might as well see the outcome so I turn left on balboa and watch as the bum drops his stolen goods which included a rusty hedge trimmer and a tennis ball.

I tried to head them off, but by that time Tony had given up the chase; perhaps happy enough to have his hedge clippers back. The bum by this time has completely changed his appearance by taking off his shirt. I actually followed the bum up the alley with him walking along my car. But then I spooked the bum and he ran ahead. He headed onto the beach and I thought what I good place to observe the bum get-away antics from afar. I went to pull into a beach parking spot but it turns out the bum just went by the beach to steal a little kids BMX. And that's where I let him get away.... riding off, shirtless and on a little kid's stolen bike.

oh, and your scab was gross. 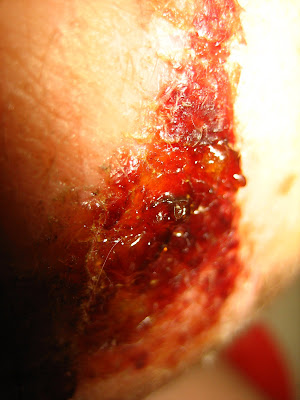